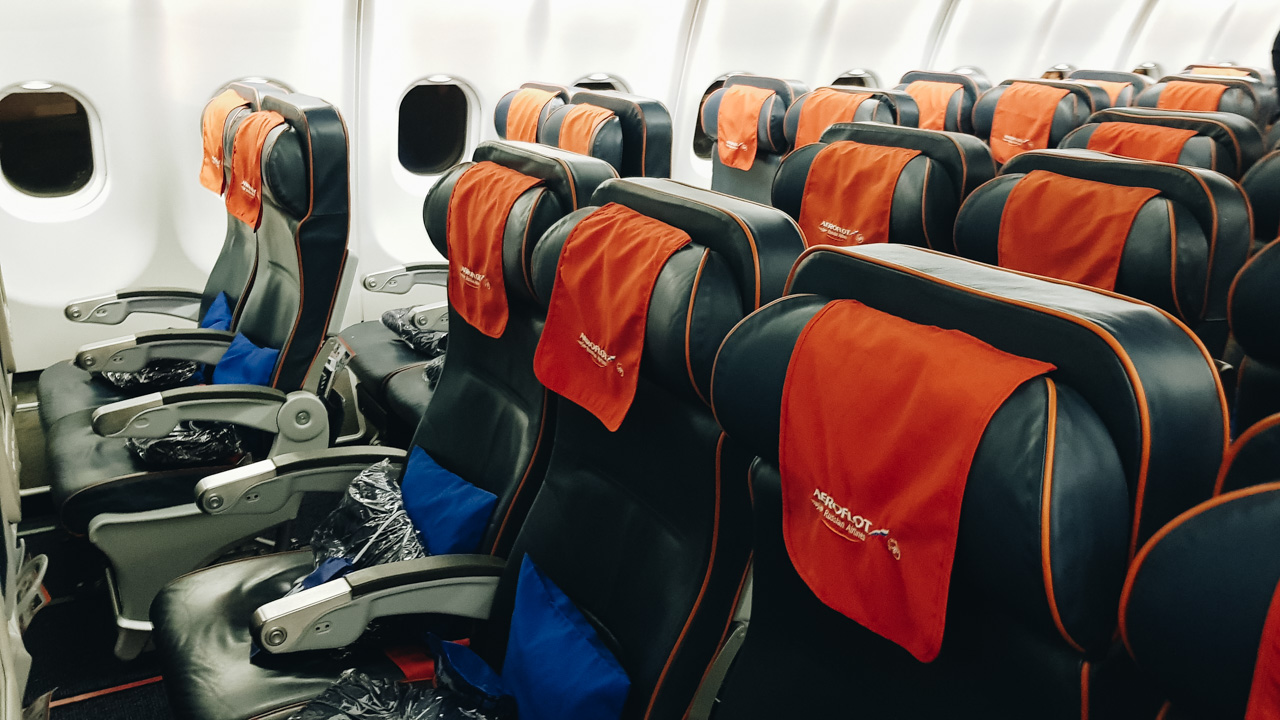 My Review of Aeroflot

I was on the train back from Gatwick Airport when I booked our flights to Japan.

London felt cold and a bit gloomy after spending three days on the sunny Spanish island of Fuerteventura with some of my closest friends. After scrolling through Facebook and Instagram, I turned to my emails for some kind of distraction on my way home. There it was! An email from Jack’s Flight Club made me sit up straight and open my eyes wide: Aeroflot were offering flights to Tokyo for £240! I immediately messaged Chris to ask him if I should book. It was around 11:30pm by then, and he was about to fall asleep. 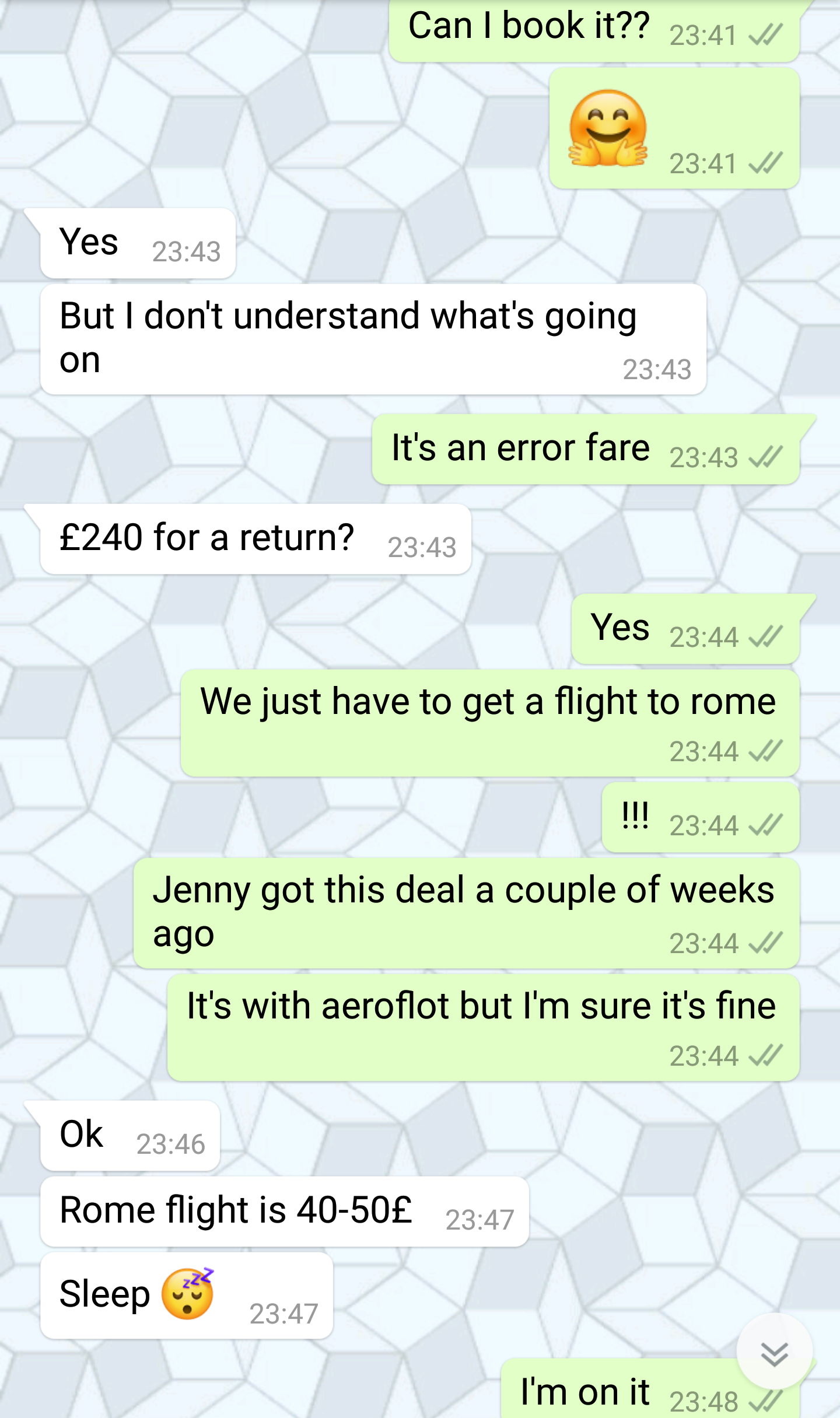 I booked the flights there and then.

It literally took me ten minutes from telling Chris about the fare to booking us flights to spend Christmas in Japan. Never have I ever made a holiday booking decision quicker than that! Particularly as we hadn’t booked the time off work or mentioned to our parents that they may not see us at Christmas… but I was sure we could get around those issues!

“It’s with Aeroflot but I’m sure it’s fine” – I hadn’t heard great things about Aeroflot but I wasn’t about to miss out on that AMAZING deal!

A quick Google told me I had nothing to worry about: although Aeroflot’s reputation was awful in the sixties and seventies, it’s now become one of the safest airlines to fly with. It gets 6 out of 7 stars from AirlineRatings, and even my uncle says that its fleet is very good (he’s in the biz).

So how was it? I promise to make this is a completely unbiased, super honest review! We flew Economy, so if you’re flying Business you can stop reading now, you lucky thing. Before you read I think it’s important to repeat the starting point for this review: the cost! Only £240 for a return trip to Tokyo. Chris was surprised that we didn’t have to fly the plane ourselves for that price.

In total, we actually got to experience four Aeroflot flights (lucky us!): our first trip was Rome-Moscow-Tokyo, and the return was Tokyo-Moscow-London. We flew on the A320 from Rome to Moscow which was surprisingly roomy (see leg room photo above). The overnight flight to Tokyo was on the A330-300. I found the seats to be really uncomfortable. I struggled to find a good position for sleeping and my neck ended up feeling a bit painful. Maybe it’s because I’m kind of short (5’4, 1m64) but the cushion bit that sticks out just pushed my head forward, which is a super awkward position to sit in. I think there’s something wrong with the design! It’s something I’ve experienced when flying on older planes before. I hope that Aeroflot has improved this in its newer fleet, but if not, more consideration to passenger comfort wouldn’t go amiss.

Aeroflot only had entertainment systems on the A330 plane, so we relied on iPads and magazines on the four hour journey on the A320 from Rome to Moscow. On the longer flight to Tokyo, we fortunately had screens and a decent selection of films to choose from. Don’t get too excited – those screens are very clunky to use and kind of look like they belong in another decade, much like the chairs. Across the two long haul flights we did manage to watch a good selection of new releases, including Baby Driver and The Zookeeper’s Wife.

I’d seen Aeroflot ads around London showing off their food, but I wasn’t expecting much from an economy class dinner. I was quite pleasantly surprised! The food I had definitely tasted better than the majority of the plane food I’ve tasted before (except for the millet porridge with pumpkin – weird breakfast). It was a great mixture of Russian/Asian inspired dishes. There was also regular re-fills for drinks and a snack bar for passengers to visit.

I couldn’t write this without mentioning the cute little Tokyo pouch we were given on the overnight flight to Narita Airport. It contained some lip balm (great for the dry cabin air), ear plugs (an essential for me), slippers, and an eye mask. The eye mask is brilliant, with one side telling air hostesses to wake you up for food and the other side telling them not to disturb you. A nice touch! We were also given pillows and blankets.

Quick mention about service – Chris and I both thought some of flight attendants were not very nice. Very blunt, no smiles, bordering on rude. That’s across 4 different flights. They did nothing wrong, but I guess that we’re used to a friendlier service, even on budget airlines, which generally helps to make flights little nicer. 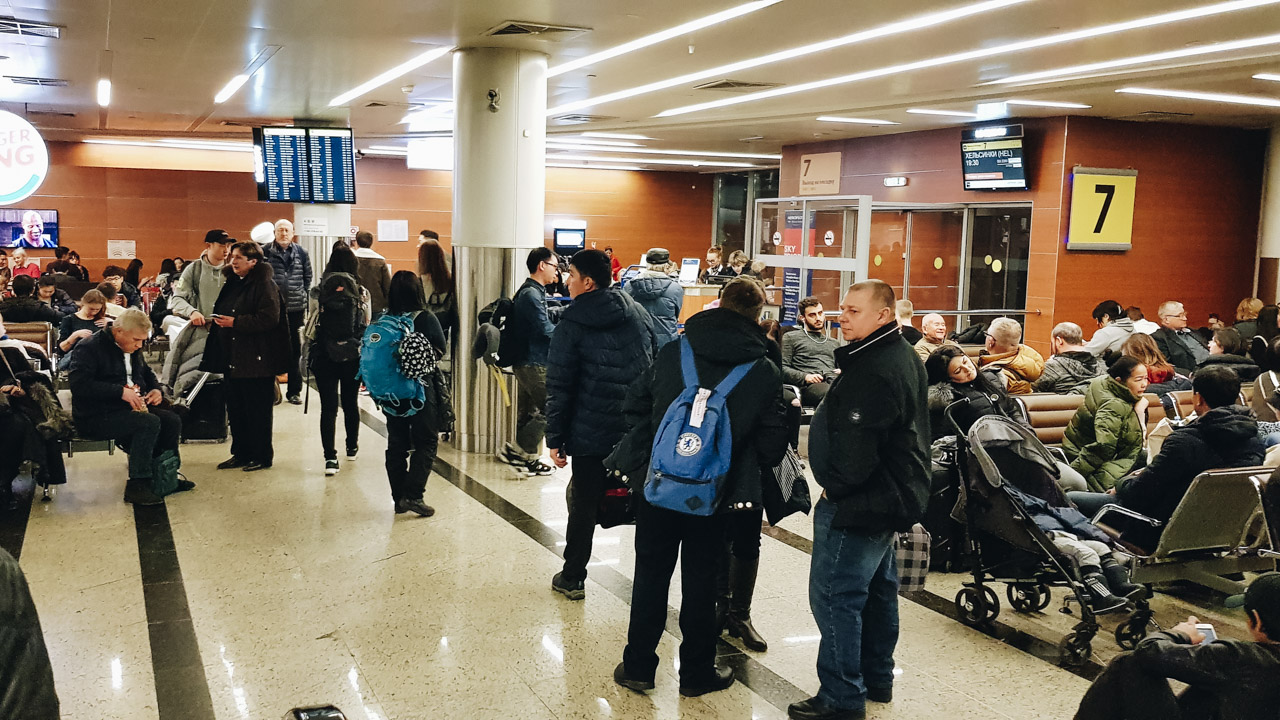 I’m not gonna sugar-coat this: Moscow Sheremetyevo is NOT a nice airport. After getting a bus transfer from the plane to the terminal, we had to join a big, slow queue to get through passport control. Past customs, there isn’t much at all. The staff appear over-stressed and this gets passed on to the passengers.

Once you’re through the transfer gate you find a couple of shops selling Russian souvenirs and snacks, and a few unappealing restaurants including TGI Fridays and Burger King. The whole place was so crowded and was nowhere near big enough for the volume of people it’s taken on! This was on both journeys. We also had to take buses to and from the plane on each journey, which seemed to take an age. Cue the comedian (Chris *cough*) who said “oh, are we driving to Japan?”.

Luckily we were only at Sheremetyevo for a couple of hours each way.

Now this rating doesn’t really reflect how we feel about the journey or Aeroflot. We were actually very satisfied, but this was principally down to the cost. If I factor that in, the rating would be closer to 4 out of 5. But there’s definitely some room for improvement.

It does feel like a budget airline venturing into the world of long-haul journeys, but when you’re paying a budget price there are certain compromises you’re willing to take. The great fare we got meant we had much more money to spend on the holiday, and we would 100% do it again. This may just take off!

Would I fly with Aeroflot again? Yes, definitely!

Would I choose them over another airline at the same price? Probably not.

Want to find your own cheap flight deal? Read my post to find out how.

Lake District: How to Spend a Weekend in Keswick

How to Spend a Day in Saint Tropez

How I Find Really Cheap Flights